You can't help but want to make a 2d overhead or isometric game after looking at some of the art available on OpenGameArt- I'll settle for a little procedural terrain generation: 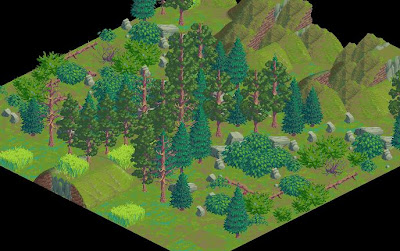 http://www.openprocessing.org/visuals/?visualID=16704 (click run if it asks about running old java)

The OGA site could use more contributors, as well as better organization to promote the best work- and of course it could be popularized by making use of the content there. I think I'll use this and some variations at the next VJ event I do- I've used recorded video from games before, but even better to generate some game-like imagery live.

Another useful feature would be for terrain tilesets to have a standard connectivity definition file- an ascii file that says which tiles connect best to which neighbors in which direction. Current that's hardcoded into the processing sketch.
Posted by binarymillenium at 8:46 PM 1 comment:

I haven't found a better graph-based VJ tool than Gephex to use in Linux or Windows (but haven't been looking much either), and it's not trivial to get it running on a modern Ubuntu system- but I've worked through all the compiler messages (with the big exception of leaving out ffmpeg) and have an archive of the results available for download.

Go here for details and a link to the download:

The reconfiguring may screw it up a little, otherwise let it install to my choice of directories and then move the bin and lib etc. files as appropriate.

I'm hoping there is a new and well-supported tool out there that can take the place of gephex- movid is not intended for VJ work but may be retrofittable.
Posted by binarymillenium at 6:38 PM 1 comment: