I bought a usb TV tuner/s-video/rca input device for my laptop, so that I can get video from DV video cameras and any other DV source straight into Gephex. Installation in Linux wasn't too hard:

tvtime:
"Your capture card driver, USBVision USB Video, is not providing
enough buffers for tvtime to process the video."

Gephex doesn't know how to change the channels or settings, so the trick is to change things in zapping and then quit and the settings will persist in gephex.
Posted by binarymillenium at 6:52 PM No comments: 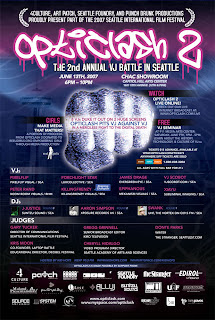 Here's a writeup from one of the judges, and he posted some video (Pixelflip vs. ?) on dailymotion.
Posted by binarymillenium at 7:25 PM No comments: 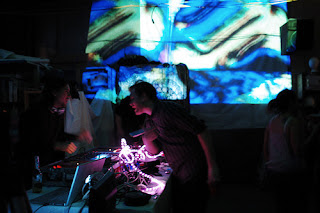 My setup was to use gephex on a Linux laptop and have a video camera and dvd player as video sources. Switching between them would have been nicer with a switch box, I was just reconnecting cables while having a graph loaded on gephex that wasn't dependent on external video input.

I had a couple of newly burned DVDs, one was lots of video game imagery. Biohazard Battle on the Sega Genesis worked decently, but old Atari games with flatter coloring and graphics could have been more interesting. Unfortunately my Atari 2600 didn't work after I pulled it out of storage. One of those $20 battery powered video game joysticks would work well for sourcing the imagery live, but I'd need someone else to play (I recall somebody brought one to Open Lab a few months ago but didn't try it out).

The other dvd had videos of a computer animation contest, one where the executable creating the animation had to be less than 32K. I had to run the dvd player output through a anything-to-anything box from Canopus with firewire in/out on it.

Four projectors were going with cloned video, and I had an LCD monitor to see what I was doing. None of the projection surfaces in the main room were that ideal but they worked. The better surfaces were out in the hall but I couldn't see them.

Gephex (or underlying Linux graphics software) is finicky about driving full-screen, sometimes there would be a sliver of the desktop underneath it. Playing around with it usually got rid of it. I spent a long time going through all my graphs and deleting ones that didn't work and adjusting output settings for ones to keep. It would be nice if each individual graph didn't have it's own output settings.

Kino plus my screengrab frei0r module was my way of getting 1394 video into gephex. I could probably write my own 1394 gephex/frei0r input module using source from Kino but I haven't gotten around to it yet.

Ideally there would be a way to get video into linux so that it is seen as a webcam- a video-to-usb device sounds ideal- I could get video from a video camera or a dvd player without using firewire at all. Supposedly there is one from X10 with linux drivers, and another from Hauppage, but neither is sold on Amazon or other sites that feel respectable enough to purchase from.


Toorcon 2007 from binarymillenium on Vimeo

Another option would be to run Gephex on the windows side of my laptop, but unfortunately it came with Vista preinstalled, and gephex doesn't run so well there.

I would have liked to be able to record the whole show or portions of it. Another RGB-to-video plus another video camera with video input recording (like my old Canon DV camera) would have worked, but added a lot of wires. Also I didn't have a spare VGA splitter output to drive it.
Posted by binarymillenium at 7:02 PM No comments: