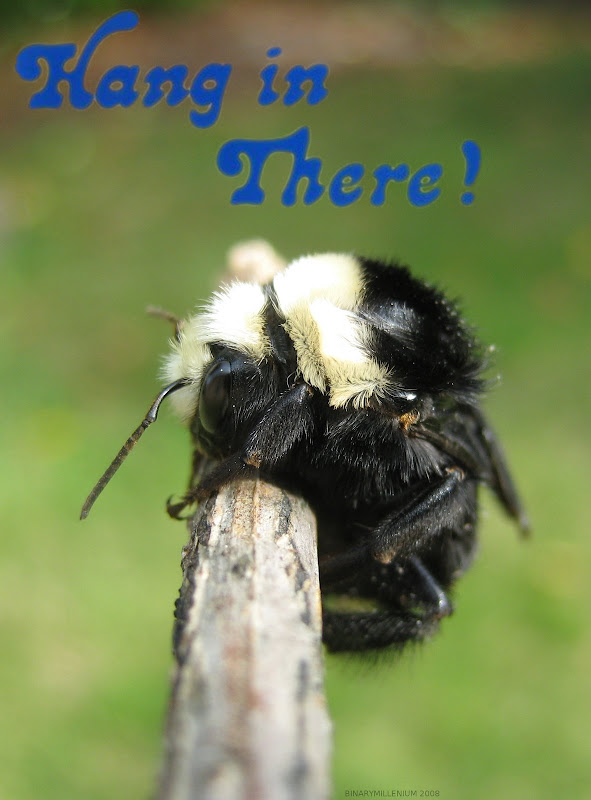 Hey lil feller. I'm just going to pick you up with this stick and you can hang on, take you back to the garden. I didn't mean to wake you up from your hibernation or whatever.
Posted by binarymillenium at 8:35 PM No comments:

I've discovered the arParamObserv2Ideal() function to correct for image distortion, and I think it has improved things. But my main problem is figuring out how to properly project the line from the origin through the laser dot in marker/fiducial space. I have a message out on the mailing list but it is not that active. 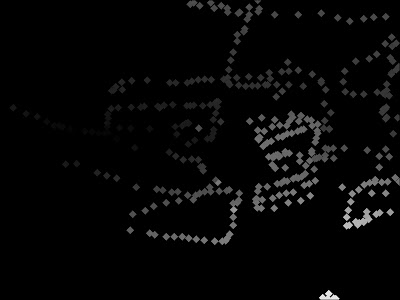 The results of my crude fillgaps processing app are shown below, using the somewhat sparse points from above. 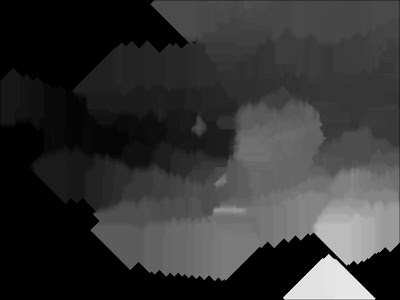 The above results look pretty good- the points along the edge of the wall and floor are the furthest from the camera so appear black, and the floor and wall toward the top and bottom of the image are closer and get brighter.

My main problem is getting live feedback of where I've gotten points. With a live view that showed all found depth points it would be easier to achieve uniform coverage, rather than going off of memory. My problem there is that to use artoolkit I have to detect the markers, then shrink the image down and draw dots over it- not too hard sounding but the first time I tried it got all messed up.
Posted by binarymillenium at 9:10 PM No comments: 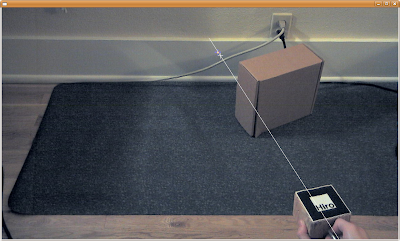 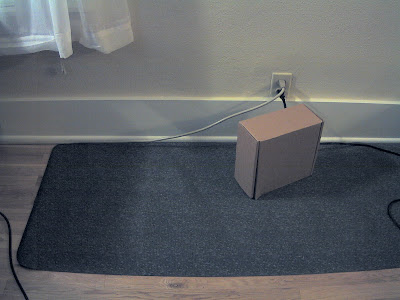 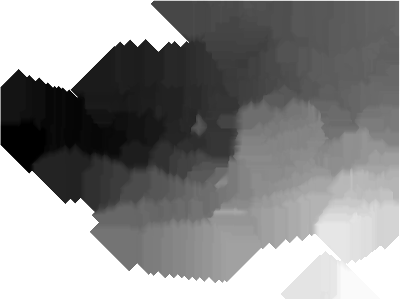 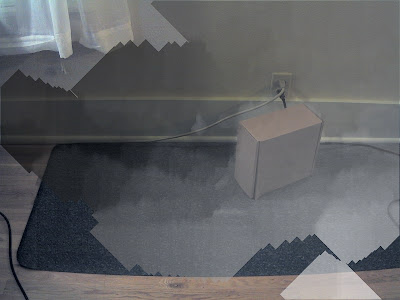 source code
Posted by binarymillenium at 9:43 PM No comments:

This robot had a camera and em field sensors in its hand, and could detect the presence of an object within grasping distant. Some objects it had been trained to recognize, and others it did not but would attempt to grab anyway. Voice synthesis provided additional feedback- most humorously when it accidently (?) dropped something it said 'oops'. Also motor feedback sensed when the arm was pushed on, and the arm would give way- making it much safer than an arm that would blindly power through any obstacle.

It's insane, this application level taint

I don't really know what this is about...

The phased array part is pretty cool, but the application wasn't that compelling: Using two directional antennas a select zone can be provided with wireless access and other zones not overlapped by the two excluded. Maybe if it's more power efficient that way?

This antenna also had a motorized base, so that comparisons between physically rotating the antenna and rotating the field pattern could be made.

This squeeze thing has a motor in it to resist pressure, but was broken at the time I saw it. The presenter said it wasn't really intended to simulate handling of real objects in virtual space like other haptic interfaces might, but be used more abstractly as a interface to anything.


This was one of two rfid accelerometers- powered entirely from the rfid antenna, the device sends back accelerometer data to rotate a planet on a computer screen. The range was very limited, and the update rate about 10 Hz. The second device could be charged within range of the field, then be taken out of range and moved around, then brought back to the antenna and download a time history (only 2 Hz now) of measurements taken. The canonical application is putting the device in a shipped package and then reading what it experienced upon receipt.

This has had plenty of coverage elsewhere but is very cool to see in person. Currently moving the receiver end more than an inch forward or back or rotating it causes the light buld to dim and go out.


A simple interface where placing a microphone on a surface and then tapping on the surface in distinct ways can be used to control a device. Also a very simple demo of using opencv face tracking to reorient a displayed video to correct for distortion seen when viewing a flat screen from an angle.

Look around the building

I found myself walking in a circle and not quite intuitively feeling I had completed a circuit when I actually had.


Also see another article about this, and Intel's flickr photos, and a a video.
Posted by binarymillenium at 9:59 AM No comments: