This video went up yesterday, was pulled down and then restored later for some reason (not before other youtube users posted their own copies and gathered many more views than the official channel)

The video states 30Hz, and there is an interesting shot starting at two minutes. 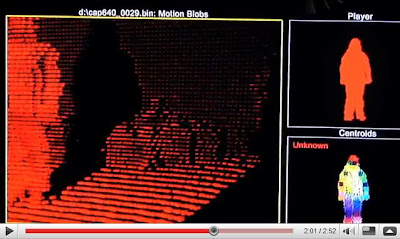 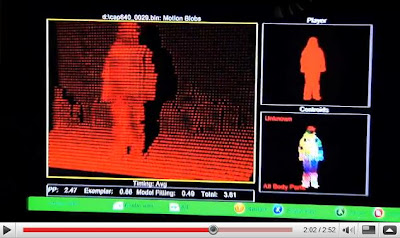 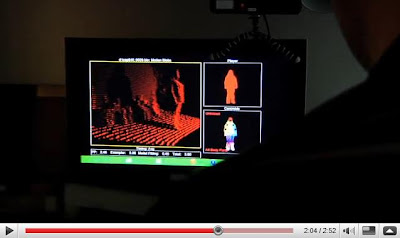 From the above screenshots it's possible to count the number of pixels horizontally and vertically, and also most of the depth bins (there may be more range beyond the wall behind the person but a minimum count is better than nothing).

The resolution looks like 64x64.
Posted by binarymillenium at 6:25 PM 2 comments:

I learned a little about structured light from the 2008 House of Cards Radiohead video and more since Kyle McDonald created an open source google code implementation- but only very recently really gotten into how it works.

I had trouble getting good scans initially and I thought it would be good to create a perfectly controlled setup that didn't require a projector or camera- instead generate scenes from software, projecting textures onto 3d objects.

One of the generated input phase images:

The obvious improvement is to add in an obj loader to this program, instead of just generating a semi-random blobby shape.

I was hoping for a lot more but managed to get a few scans of people during a New Year's Eve party:

Those were all made using modified versions of Kyle McDonald's slDecode and slCapture programs. I'll post those somewhere eventually.

This script is currently very very slow, but it's good to be able to debug in matlab and have easy access to fft and other functions.

Note the vertical lines where phase propagates vertically in glitchy ways- some filtering (and even slower processing time) ought to be able to clean that during the flood fill.

I hope to go mainly in the direction of high resolution high fidelity scans, as opposed to high frame-rate low sample-time scans, though I think I can access several high frame rate cameras for use in the latter. There is also lots of room for improvements (especially at the phase unwrapping stage) that would benefit either one of those.
Posted by binarymillenium at 6:17 AM 5 comments: