[update- the output of bundler is less misaligned looking than this, I was incorrectly displaying the results here and in the video]

Bundler (http://phototour.cs.washington.edu/bundler) takes photographs and can create 3D point clouds and camera positions derived from them similar to what Photosynth does- this is called structure from motion. It's hard to believe this has been out as long as the publically available Photosynth but I haven't heard about it- it seems to be in stealth mode.

From that video it is apparent that highly textured flat surfaces do best. The car is reflective and dull grey and so generates few correspondences, but the hubcaps, license plate, parking strip lines, and grass and trees work well. I wonder if this could be combined with a space carving technique to get a better car out of it.

It's a lot rougher around the edges lacking the Microsoft Live Labs contribution, a few sets I've tried have crashed with messages like "RunBundler.sh: line 60: 2404 Segmentation fault (core dumped) $MATCHKEYS list_keys.txt matches.init.txt" or sometimes individual images throw it with "This application has requested the Runtime to terminate it..." but it appears to plow through (until it reaches that former error).

Images without good EXIF data trip it up, the other day I was trying to search flickr and find only images that have EXIF data and allow full view, but am not successful so far. Some strings supposed limit search results by focal length, which seems like would limit results only to EXIF, but that wasn't the case.

Bundler outputs ply files, which can be read in Meshlab with the modification that these two lines be added to ply header:

Without this Meshlab will give an error about there being no faces, and give up.

Also I have some Processing software that is a little less user friendly but doesn't require the editing:

Bundler can't handle filenames with spaces right now, I think I can fix this myself without too much work, it's mostly a matter of making sure names are passed everywhere with quotes around them.

Multi-megapixel files load up sift significantly until it crashes after taking a couple of gigabytes of memory (and probably not able to get more from windows):

This application has requested the Runtime to terminate it in an unusual way.
Please contact the application's support team for more information.


Resizing them to 1600x1200 worked without crashing and took only a few hundred megabytes of memory per image, so more megapixels may work as well.

The most intriguing feature is the incremental option, I haven't tested it yet but it promises to be able to take new images and incorporate them into existing bundles. Unfortunately each new image has a matching time proportional to the number of previous images- maybe it would be possible to incrementally remove images also, or remove found points that are in regions that already have high point densities?
Posted by binarymillenium at 6:37 AM 21 comments:

The official instructions and cursory google searches didn't turn up a good explanation, but I've figured it out for myself. I was confused about nesting blocks, sometimes getting no output or getting duplicate output.

In this example the base has a single level of nesting with two sub-blocks.


This file duplicate the original block structure but adds a comment:
some.html:


The output would be

Moving the 'new stuff' line before the the block.super would swap the order of the output statements. There is no way to interject the new comment inbetween inner1 and inner2 without creating a new block that sits inbetween them in the parent base.html file.

Don't try to do this (which is what I thought to do initially):

Instead, the extending file that wants to alter any parent block does it in a non-nested way, don't redefine an inherited block while inside of another inherited block:


And now the output will be without duplication.

block.super needs to be in there or the redefinition of inner2 won't be applied to anything.
Posted by binarymillenium at 11:20 PM 2 comments:

The idea is to project laser lines onto a flat surface, image them, and then put objects in front of the surface and compute the displacement made by the object.

Here is the flat base with a line on it: 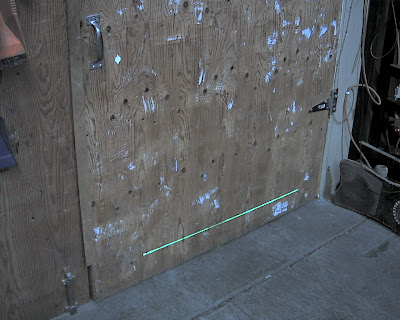 Here is the line at the same position with objects intersecting: 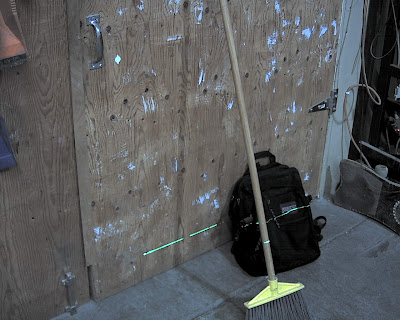 Finding depth involves figuring out what the 2d projection of the normal line that is perpendicular to the wall at any point along the laser line. I'm working on this but it's also possible to guess an average line for low precision demonstration. The software looks for all points where it believes the laser is shining, and then computes the intersection of the normal line with the original object free laser line, and gets depth.

I had about 8 different images from laser lines, here are the results from two: 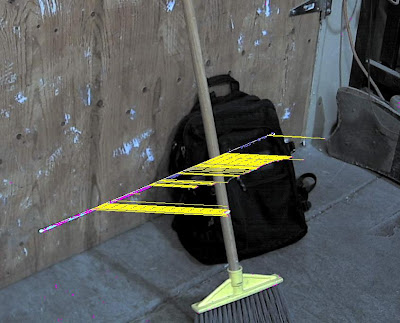 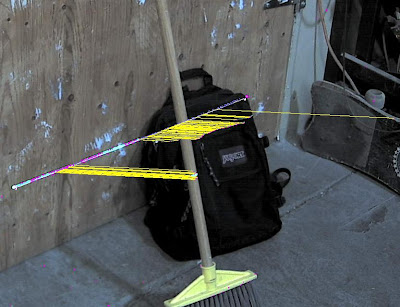 The yellow lines are the projected normals from the base line to the found laser line on the backpack and broom. There are some spurious results, and also on the dark woven backpack material the laser was not always reflected strongly enough to register.


The source code is here: